Only dead fish go with the flow.

The Timeliness and Futureness of Programs

in The Futures of the Computer (C. Pias, Ed.) Zurich/Berlin:
Diaphanes Verlag, 2005, pp. 65-82.
PDF
A computer program (henceforth, program) is a machine. There is no way around this condition of programs. But until we understand what this entails, the statement bears as much knowledge as any other truism.
Why is a program a Machine? And if this is so, what are the consequences for our understanding of the time dimension (timeliness), in particular, “future-ness,” of programs? The question has pragmatic implications: Today we are engulfed in programming more than in any other form of human activity. Behind almost all activities—production of goods, machines, processed foods, medicine, art, games and entertainment—programming is involved in a broad range and variety of forms. We invent new materials in computational form before we actually “make” them; we explore new medicines; we design the future (architecture, urban planning, communication, products) using programs; we redefine education, politics, art, and the military as we express our goals through programs. All the invisible computers (embedded in our world) that make up our universe of existence were programmed and keep undergoing reprogramming. Therefore, to address time aspects of programming is to account for the meaning and efficiency of a form of praxis that defines the human being in humankind’s current new age[1].
But what does it mean to program? Let us take a simple program procedure: the factorial, which is frequently present somewhere in the larger scheme of things, though not of particular importance. It is part of the mathematical description of the world. The factorial of a number n is denoted by n! and is defined in mathematics as
n! = [(n-1) Â· (n-2) . . . 3. 2. 1] = n Â· (n-1)!
Even those who refuse to look at a formula (“Mathematics is not for me!”) could, if they spare one second, notice that to calculate the factorial of n one would calculate the factorial of (n-1) and multiply the result by n, that is, n! = (n-1)! Â· n. (Obviously, if n=1, the factorial is 1.) This means that in order to calculate the factorial, we multiply 1 by 2, the result by 3, the new result by 4 and so on until we reach n. A counter keeps track of how the numbers increase from 1 to n.
How does a computer program handle this? We can, as I did above, define the factorial computationally:

“Where is the machine here?” some will ask (and not only those with no broad knowledge of computers). As we know from literature or from using machines, a machine takes something, called Input, does something with it, and produces the result as Output:

1. The machine “factorial”
This applies regardless whether the machine crushes stones, makes salami from raw meat, or keeps a certain rhythm controlled by the weights turning a wheel (the mechanical clock). Let us consider a rendering (2) of the machine called the factorial program. (In this case, the input is the number 6, whose factorial will be calculated).

2. The factorial program (see above) can be viewed as an abstract machine.
We notice here parts that decrement (6, 5, 4,…), multiply (*), and test for equality. We also notice a 2-position switch and a factorial machine (it takes a number and calculates its factorial). It is obvious that our machine contains another machine, the one called factorial. This qualifies it as an infinite machine, in the language of machine theory. Moreover, if we want to have our program evaluated, we need to submit it to an evaluator or interpreter. (In simple language, this means to test it in order to find out what to expect from the program.) 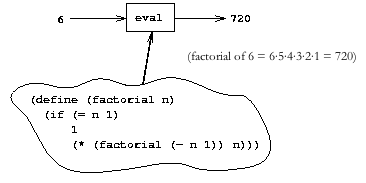 But the analytical engine is, beyond question, the most stupendous work of human invention. It is so complicated that no man’s mind could trace the manner of its working through drawings and descriptions, and its author had to invent a new notation to keep account of it (p. 458).