Epigenetics and Anticipation Presents recent research in Epigenetics and Anticipation. Provides the most promising research- in- progress and the most advanced exchange of ideas in the field. Ranges from hard-core epigenetic scientists to those building upon epigenetic knowledge in formulating new perspectives. https://link.springer.com/book/10.1007/978-3-031-17678-4 Truth.Fiction.Lies: Confessions of an Italian-Irish-Catholic-American Immigrant to Canada by Patrick X Walsh.Mihai […]

Presents recent research in Epigenetics and Anticipation. Provides the most promising research- in- progress and the most advanced exchange of ideas in the field. Ranges from hard-core epigenetic scientists to those building upon epigenetic knowledge in formulating new perspectives.
https://link.springer.com/book/10.1007/978-3-031-17678-4

by Patrick X Walsh.
Mihai Nadin’s Fellowship at the famous Salzburg Seminar, where he was able to be with his future wife, Elvira, for only a few days, introduced Patrick Walsh, a distinguished author, to the dismal facts of life in communist Romania. Nadin left an impression, as he did during his entire life.
Chapter 7 Download

Anticipation in Africa: A Need or an Illusion? The possible future informs the present

Presentations and lectures at the University of Bucharest (Sociology, Mathematics and Computer Science)

University of Transylvania, National University of the Arts, within the framework of the publication of the translation into the Romanian of The Civilization of Illiteracy, February 2016

[Mihai Nadin: A Romania of Ideas, young talent, originality, and authenticity is the only way to give meaning to this centenary celebration.]
https://romanidecentenar.ro/stiinta/

Mihai Nadin was the recipient of the Leonardo Pioneer Award in recognition and appreciation for his inspiring work at the intersection of arts, sciences, and technology on October 18, 2018. 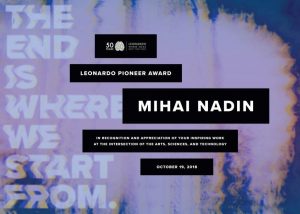 Mihai Nadin was invited to deliver the keynote address at the Second International Conference on Anticipation, to be held November 8-10, 2017 in London.

Anticipation and Medicine, the third in a series of three international conferences took place at the Hanse Wissenschaftskolleg/Institute for Advanced Study (Delmenhorst, Germany) on September 28-30, 2015.

Anticipation Across Disciplines, released in Fall 2016, is the second book in a series of three volumes, published in the Springer series Cognitive Systems Monographs. Papers presented at the international conference (September 22-24, 2014) of the same name cover topics such as information processing, politics, botany, architecture, botany, anticipatory computation, computer science, education, art/creativity. Readers seeking a foundation for anticipation will find in this book recent outcomes pertinent to plant life, political anticipation, cognitive science, architecture, computation. Leading scholars in economics, energy research, oceanography, engineering, and behavioral sciences working in the defining spirit of interdisciplinarity implied by anticipation provide rich evidence of anticipatory processes at work of a very large scope: from an art event (documented in this book) to experiments in neuroscience, anticipation in engineering, anticipatory expression in plants, anticipation in politics, and anticipatory computing.
For more information (including ordering information) see:
http://www.springer.com/us/book/9783319225982

Mihai Nadin: “Even those who avoid any contact with the technology cannot live without it.” Interview by Titus Vijeu, Ziarul de Duminica, February 5, 2016