Is a Bionic Goalkeeper Possible?

Anticipation and Intuition (published in German), Mensch und Planung (Humans and Planning). Essen, Germany:PKK, 2006, pp 6-21. PDF Is a Bionic Goalkeeper Possible? Anticipation and Intuition. Remember the summer? Penalty kicks that to a great extent decided the world championship in soccer? What’s the connection between a successful goalkeeper and the company presidents who made […]

Anticipation and Intuition (published in German), Mensch und Planung (Humans and Planning). Essen, Germany:PKK, 2006, pp 6-21.
PDF
Is a Bionic Goalkeeper Possible? Anticipation and Intuition.
Remember the summer? Penalty kicks that to a great extent decided the world championship in soccer? What’s the connection between a successful goalkeeper and the company presidents who made Google, Audi, SAP, Telefonica—to name very few—stars of the stock market? The answer is anticipation. But we could reach a conclusion before looking at the arguments. Let’s take a detour. Five years ago, a very courageous cognitive scientist, Miguel A. L. Nicolelis, reported on “actions for thoughts.” His article, in the prestigious Nature (January, 2001) started with a description of scenes from the final World Cup game of 1970 between Italy and Brazil: a clever throw-in by TostÃ£o, a simple flick of Rivelino’s magic left foot and the crowd that packed the stands slowly rose in anticipation [emphasis author’s]. Pelé floated above all the Italian defenders to encounter the ball in mid-air. After that almost poetic introduction—the scientists happens to be from Brazil—Nicolelis reported on real-time direct interfaces between the brain and electronic and mechanical devices—which was his scientific and technological accomplishment at Johns Hopkins University in Baltimore, Maryland. Such interfaces, he wrote, could one day be used to restore sensory and motor functions. Here is the diagram of such an interface. 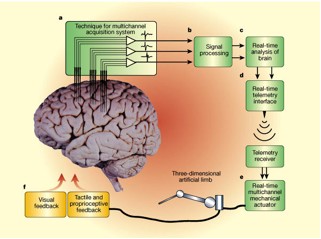 Schematic description of the general organization of a type 2 HBMI. (Hybrid brain—machine interface). Nature 409, 403-407
And here is my question: Would Pelé, or any other player coming out of an operation be capable of the anticipation that made him so successful and famous? Would Lehmann anticipate the ball and give Germany the victory? Would Nicolelis himself, a scientist with impressive anticipatory qualities, be the scientist acknowledged for pioneering work in brain prostheses? Players, as well as company presidents, are subject to injury and illness. Therefore the question: Can such devices implanted in the brain replace defective parts without affecting our performance, in particular the ability to forecast, predict, guess, intuit, anticipate? Replaced knees or hips and cochlear implants are already helping persons in need; an eye prosthesis is in progress. These are simple thoughts meant to introduce the reader to the subject of anticipation, and to its more casual embodiment in what we call intuition. What we want to gain by entertaining such thoughts is enough understanding of what anticipation and intuition are in order to provide even a tentative answer to the questions formulated so far. Yes, if the mind is intact but the artificial knee does not perform alike a natural knee, the action will not be successful. Of the cochlear implant affects hearing, the sound component of the anticipatory process will not suffice for successful action. But even with an artificial hip or an eye prosthesis, intuitions remain possible. Because, as opposed to anticipation, always expressed in action, intuition remains in the realm of mind activity. Therefore the question of whether a brain prosthesis affects intuition remains open for the time being.
The hunch, the gut feeling, the insight, the inspiration, emotional thinking, and quite a few other semantic equivalents stand, depending on the context, for what we call intuition. The etymology is far from delivering the magic key to unlocking the various aspects of intuition. Indeed, the late Latin intuitio—the act of contemplation—is probably already loaded by the religious practice of divination in the space (templum) dedicated to the reception of enlightenment. But 200 years before intuitio, there was intueri, which is as simple as to look at. (Does the goalkeeper only look at the player who will execute the penalty kick?) Yes, intuitions always seem obvious—after the experience. You look at something and—voilÃ !—intuition guides you in avoiding a dangerous situation: You pilot an airplane and somehow know how to find a way out of a storm; or in finding the path to some desired result—as in a game of chess. Moreover, it suggests that, when we are faced with many choices, the right feeling guides us, in the shortest time, to the shortest or best path, to the less obvious but right next decision.
Dewey, from among the many who wanted to understand how intuition works and, moreover, what it means to be qualified as intuitive, wrote quite eloquently:

“These â€˜feelings’ have an efficiency of operation which it is impossible for thought to match. Even our most highly intellectualized operations depend upon them as a â€˜fringe’ by which to guide our inferential movements. They give us our sense of rightness and wrongness, of what to select and emphasize and follow up, and what to drop, slur over and ignore among the multitude of inchoate meanings that are presenting themselves …. These qualities are the stuff of â€˜intuitions’ (cf. John Dewey, Experience and Nature, 1925). 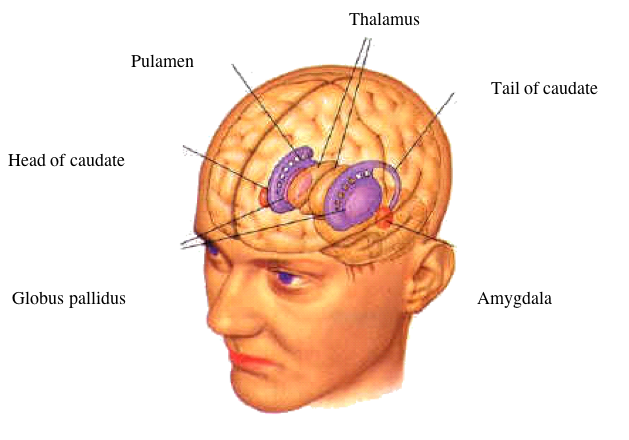 The evidence linking the basal ganglia (consisting of the striatum, substantia nigra, and globus pallidus) to implicit learning is straightforward: Temporal patterns predictive of significant events take place by repeated exposure. After such repetitions, the basal ganglia associates the predictor to the reward implicit in the process (dopamine release) and is capable of what is called temporal pattern prediction. Since the characteristics of the process are close to the adopted description, the basal ganglia are usually seen as a correlate of implicit learning (cf. Lieberman, p. 114). The intuition mechanism brings up the reward (as dopamine release) and the role of emotions. After all, intuitive thinking is often equated with emotional thinking. That other parts of the brain, such as the amygdala, are involved only makes the deterministic localization even more questionable.
Imagine now that the new circuitry, in a miniaturized form, was implanted. The bionic person shows no signs of surgery. Everything is as normal as with a person with a heart implant, or a knee replacement, or a cochlear implant to help hearing. The situation—the soccer game, a poker game, downhill skiing—that involves intuition under normal circumstances is unfolding. Will the bionic person be capable of anticipation? This is the question I left open in the introductory lines. Will a Lou Gerstner, who served IBM not so much on account of his previous work at Nabisco or a credit card company, but on anticipation-guided leadership with a brain implant be capable of the same performance? Will Bernd Pischetsrieder (former president of VW) be as visionary as a bionic person as he was as a normal, unenchanced person? Scientific optimism, which drives our work as we face the impossible, nudges me to say “Yes!” and to suggest that, as we make progress in integrating the natural and the artificial, we will be able to perfectly fix a damaged brain. Scientific integrity, which acts as our quality control instance, counteracts optimism. Torn between the two, I can only reaffirm that, just as anticipation is a characteristic of the living, the only prosthesis—whether for brain or for kidney, heart, hip, shoulder, ear, eye, arm, etc.—will have to seamlessly become part of us. That means it would have to be a living prosthesis, not a mere physical one, a piece of matter programmed for some predefined functions.. Anticipation is an expression of the whole being, not of its parts. And if we should ever try to reach the old goal of science to produce life from the non-living, we should know that such a project will not succeed unless we can endow it with anticipation. As formulated here, this fundamental claim is a mere intuition. Anyone willing to challenge it?