The Many Changing Faces of Type 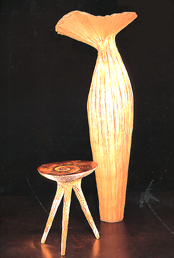 Wood, lead, photocomposers, digital fonts – how telling the sequence, especially for those who have experienced them all, and not only as subjects in their college education. Otl Aicher, one of the few who could claim such an experience, asks, “Why a new typeface?” fully aware that Garamond and Bodoni had purposes quite different from those heralded in this volume. He is aware of the type inflation of our days, but not necessarily opposed to the idea of typographic experimentation. Along with many others in the USA, in the old country, or in Japan, Aicher, grand seigneur of European design, knows that once upon a time a typeface was perceived as good if it was built on some strict formal elements (square, circle, triangle). That things have changed, we all know by now. But do we really know how to evaluate new type that results from interpretations of classical faces or of their combinations?
As we examine the spreads designed by each typeface author published herein, we understand that the new type negates many assumptions associated with what we still call good quality typography – or at least to what we learned (or taught) this to be. Handwriting, sophisticatedly interpreted, pervades the realm of current print. Sampling, from a handwritten text or from painting, says something about a technique that until recently was more in the domain of the musical than in that of typography. But that is not all. Effects of facsimiles, bar coding, neon road signage, rubber stamps, light bulb displays, hand lettering, chalk on movie clapboard, brushwork, and even of California (where else?) license plates, scribbling, stenciled or stamped letters are translated into type. What this means is, of course, artistry, but also a broadening of the purpose of type.
Indeed, type is no longer only for communication. It is also for original expression and constitutes its own aesthetic domain. Sometimes letters are designed to function like musical notes or like the Labanotation used for choreography. Other times, they result from poetic considerations or from multimedia justifications. The cold objectivity of typography is relativized by subjective designers in terms never before associated with type. And this does not apply only to logotypes! Paradoxically, the new freedom and subjective quality acquired in type design are the result of science and technology. Mathematics delivered the notion of randomness, a concept that classic typography would have qualified as heresy. In our days, it is effectively integrated in the procedures for generating new typefaces. When randomness replaces the sophisticated invisible geometry of the great masters of yesteryear, a vernacular quality of type is achieved. Splicing comes from genetics, as it does from the experience of film and television editing. This quality translates into typefaces “genetically” derived from the great library of the civilization of literacy. Letters are conceived as images, with iconic values that negate the abstract nature of any western alphabet. Accordingly, words no longer grow as linear strings of symbols, but as visual configurations, as drawing, painting, as sculptures. No surprise that the third dimension is again investigated. The medium, once upon a time wood or lead or film, is now the infinitely versatile abstract digital representation. The limited linear composing stick is replaced by a multidimensional space.
Obviously, legibility becomes only one among many functions. The look of hot metal or of wood or of any other material can be simulated. But the purpose behind the entire effort is different from that of making a book or printing a newspaper. Designers understand that the growing variety of current publication, including digital media, requires in turn a variety of means, including those we call typefaces. The freedom some take in making up “alphabets” freed from the purpose of representing a text and only a text is on the borderline between the culture of literacy and that of the post-literate society. Letter and word spacing, not to mention kerning, takes on new meaning in this new context. Actually, to break the conventions of spacing or to use kerning creatively is a challenge. Overall rhythms result from the new typefaces’ being integrated in the global image for which they are conceived. By no surprise, some of the examples offered in this book were initially meant for one-time use. The call for submissions implied the notion of repetitive use, intrinsic in Gutenberg’s invention. But these submissions also confirmed that we can afford uniqueness without compromising market expectations. Such gestures are today infinitely less provocative than the emergence of a new typeface designed for Berthold, Linotype, or any other of the foundries that embodied the romantic age of typography.
Innovation lifts type from the stage of reverence for the classical, bringing it to the forefront of an extremely dynamic industry. While I don’t care for the question “How did you do it?”, to read the anecdotes behind the development of typefaces selected for this publication is itself rewarding. Imagination associated with visual discipline seems to be the magic formula. But experimentation goes well beyond all we know from the noble history of typography. The fundamental element is the digital. What this means need not be explained to those who practice it. Let’s face it: without the designers who discovered the potential of digital technology, we would still be living in the age of computer-aided banking. Whoever takes part in a FUSE conference or visits FUSE shows gets a sense of the creative energy of typedesigners. They also get to know that we owe it to people like Neville Brody, Erik Spiekermann, David Berlow, and others that the laserwriter, and the scanner, and the plotter, and all those CPU cycles that artists burn in searching for new forms helped in establishing new typographic values. This evidently applies to the designers whose work was selected for this book.
As Access Factory finishes this second volume in the Graphis series, it becomes part of the ongoing celebration of a new condition of type.
References
Otl Aicher, Die Welt als Entwurf. Berlin: Ernst & Sohn, 1991