An idiot is someone not able or willing to listen.

The Future of the World Belongs to the Illiterates

Recently, during a magnificent concert in Zurich, in which Herbert Blomstedt conducted a rendition of Ingvar Lundholm’s Poesis, someone with an iPhone managed to ruin the pleasure of the listeners nearby. Well, if you want to experience art you’d better go to see it, hear it, touch it, smell it—and hope that the digital barbarians will not interfere. That does not mean that you will not be subjected to the barbarism of those who confuse the aesthetic experience with an exercise in recording. At the Hermitage in St. Petersburg, the Madonna Litta (attributed to Leonardo da Vinci) became the object of “selfies” to the extent that one wished to keep the selfie-savages out. Still I would never recommend that someone try to get the meaning of this work by looking at it in books or bringing it up on the Web. (In Vienna, where the people have a quirky sense of humor, the city provided a large reproduction of The Kiss by Gustav Klimt for those desperate to get themselves in the picture.)
From the perspective of my understanding, things will eventually settle to the extent that a minority will still prepare soup at home, from scratch, while others will warm up canned soup and never realize what they are missing. Some will attend concerts and museums, others will continue to consume “canned” art. By the way, art itself is changing, and not always for the better. 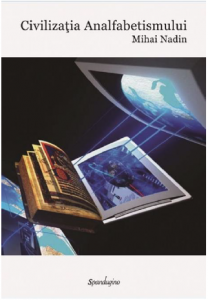 This is not one among the usual lamentations about the decline of literacy. As the author spells out from the beginning, to write several hundred pages that leave out those who are the very subject of concern would be preposterous. To praise literacy for the literate ones (encouraging their contempt of the illiterate), would be snobbish.

This book (which speaks of sex, food, goods, God, supermarkets, computers, sports, tv, virtual reality, philosophy, science – and also of writing and books) does not only deal with the Dark Side of the Gutenberg Galaxy; it mainly speaks to those who believe to live on the luminous one. It is not for THEM, it is only about THEM, it is also for and about US. And we (the literate ones) will discover many things that we did not know (as yet, or enough, in spite of our Wisdom). UMBERTO ECO