When in doubt don't seek salvation in what you know; questioning is the source of knowledge.

Toward a Neural Network Theory of Emotional Influences on Creativity 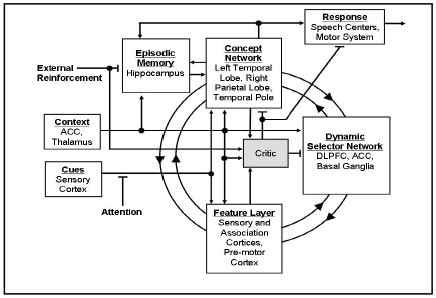 Proposed mapping of the modules of the idea generation network of Figure 1 to brain regions. DLPFC = dorsolateral prefrontal cortex. ACC = anterior cingulate cortex. (Reprinted from 5 with the permission of Sage Publishers.)

Hence we model the emotional influences on idea generation via amygdalar and OFC influences on the basal ganglia (striatal) gate, as shown in Fig. 2. In models by Levine et al. of decision making tasks ([19], [20]), the amygdala and OFC send affective signals to the striatal-thalamic-cortical pathway that excites or inhibits behavioral responses. The network of Fig. 2 combines parts of the decision network of [20] and the ideation network of Figure 1 whereby the critic is identified with the striatal-thalamiccortical pathway.
In the network of Fig. 2 the amygdalar and OFC influence is shown in the form of a gated dipole [21], a network that combines “on” and “off” channels of opposite significance in such a manner that shutting off either channel transiently activates the opposite channel. In this case the on channel transmits signals that promote certainty or confidence in one’s cognitive processes and therefore favor articulation of an idea. The off channel transmits signals of uncertainty that oppose articulation. The on signals in turn excite the striatal direct pathway which yields “GO” signals, whereas the off signals excite the striatal indirect pathway that yields “STOP” signals.
Emotional states that promote uncertainty therefore bias the amygdalo-striatal signals toward activation of the indirect pathway and therefore reduce articulation of ideas. These emotional states can include incidental moods, whether natural or experimenter-induced, of uncertainty-related emotions such as fear or hope. They can also include apprehension from being in the presence of other people who might be critical, and there is evidence that brainstormers on the average feel this less when interacting via computer instead of face-to-face [3].
Finally, these states can include the prevailing states of patients with conditions such as OCD. Conversely, emotional states that promote certainty bias the amygdalo-striatal signals toward activation of the direct pathway and therefore tend to increase articulation of ideas. These states can include incidental moods of certainty-related emotions such as happiness, anger, and disgust. Brainstorming success is also increased by giving different brainstormers in the group defined sub-tasks that are different between group members, and the cognitive priming from a known expectation strengths the feeling of certainty.
5. GENERAL DISCUSSION
The network shown in Fig. 2 for emotional influences on creativity is a schematic one that leaves out considerable detail. For example, in the decision network of [20] the amygdala and OFC constituted separate layers not shown here with the OFC at a category level and amygdala at an attribute level, joined in an adaptive resonance module for affectively based categorization. Also the symmetry between affective signals of different signs is an oversimplification. Considerable evidence exists that positive and negative affect (whether in the sense of certainty, as used in this paper, or the more traditional sense of pleasure and displeasure) are subserved by separate neural systems. Dopamine neuromodulation plays a major role in the positive but not the negative affective system (see [9] for a review), and there is more sketchy evidence that serotonin plays a role in the negative affective system as a sort of stabilize that puts the brakes on activity engendered by dopamine (see [22] for a decision model that uses a form of opponency between dopamine and serotonin).
The perception of certainty or uncertainty can be considered as one aspect of metacognition. Metacognition is defined as knowledge and monitoring of one’s own cognitive processes. It includes, among other things, judging one’s likelihood of knowing the answer to a question to be asked; stating the degree of confidence one has in the answer to a question; and remembering where one learned a particular piece of knowledge (the latter is called metamemory). The psychologists Nelson and Narens [23] discussed the hierarchical nature of general cognition versus metacognition: metacognition operates at a higher level, that is, represents other cognition and controls it. Metacognition can be further subdivided into metacognitive knowledge, experience, and skills [24].
Metacognitive processes are an important component in all cognitive monitoring whether creative or conventional. They have not been studied much in neural networks so far, Suresh and his colleagues have been studying the inclusion in artificial neural networks of the metacognitive capacities of deciding what, when, and how to learn (see, e.g., [25]). Incorporating metacognition in brain-based networks is bound to be a long process due to its multifarious nature, but networks such as the one of Fig. 2 begin to point the way. 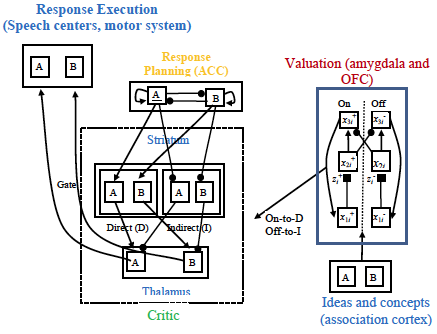 Fig. 2. Network combining emotional influences from the amygdala and OFC with the critic at the striato-thalamo-cortical loops. A and B denote two possibly competing ideas. Arrows denote excitatory signals, filled circles inhibitory signals. In the gated dipole, the node activities are denoted by x’s with + for “on” activities, - for “off” activities (see text), and depletable transmitter weights by z’s.