Current human activity is characterized by qualities that negate those of the Machine Age.

Anticipation: A Bridge between Narration and Innovation

(In: A. P. Mü ller, L. Becker (Eds.), Narrative and Innovation, Management – Culture – Interpretation, Wiesbaden: Springer Fachmedien 2013, 239-263.
PDF
In Memoriam: Steve Jobs
Who’s afraid of non-determinism?
Everyone. No one goes to his physician prepared to accept a diagnosis that might be right or wrong. You don’t send an e-mail that just might reach your addressee, or might reach someone else, or might get lost. You don’t turn the key in your car’s ignition under the assumption that it might not start (or at least not when you need or want it to). Innovation, which literally means to renew, renewal, is another human endeavor in which you don’t want to take a risk. It might take you where you don’t want to be, to situations you would prefer not to go through. For the sake of illustration, let us recall an innovation broadcasted around 1970: the nuclear pacemaker (New Scientist, December 1972) with batteries containing metallic plutonium 238 implanted in someone’s chest. Nuclear energy was the big innovation. What better hope could a heart patient wish for?
Then, as now, innovation was romanticized. Although, as research shows, “people are biased against creative ideas” (Mueller, Melwani and Goncalo 2011). If the nuclear pacemaker were the only example, we could still live with innovation, even if, sometimes, the costs attached to it stand in no relation to the outcome. Just for the sake of illustrating this statement, here are some examples of innovations and the narrative associated with them. Grain storage triggers the risk of insect infestation. An insecticide should not alter the characteristics of the stored grain. The narrative is simple: a fumigant – Zyklon B – was developed by Fritz Haber, a distinguished Nobel laureate in chemistry. The rest is the tragic history of millions of Jews murdered in gas chambers. The story is even more provocative: Haber was a Jewish scientist. To speed up the growth of soybeans, Agent Orange was developed. Deployed by the USA during the war in Vietnam, the chemical caused birth defects in over 500,000 people. TNT, the explosive of choice in two world wars, was developed as a yellow dye; Ecstasy for addressing abnormal bleeding. Unfortunately, the number of examples of innovation that humankind could do without is not decreasing. The reason is not only innovation euphoria – cloud computing, nanotechnology, genetic medicine, for example – but also the lack of progress in anticipating the consequences that innovation entails (Nadin 2003). As we shall see, anticipation is different from prediction (which is based on probabilities) and forecasting (based on models that try to account for randomness). The innovation narrative and the narrative of unprecedented consequences are not the same. But they are related. The few examples given above are indicative of the relation.

Figure 1: “The advantage of a nuclear pacemaker is its long life time,” writes the author of the note in New Scientist, ignoring the problem of consequences to the patient.

etc., etc., etc. The list is open. Use your imagination. Write your own stories
based on narrations you are familiar with.
Recently (Krulwich 2011), the narration of the death of Richard Feynman’s wife made the rounds. The time of death (precise narration) was the time at which the clock in the room where she died stopped. Feynman, no doubt affected by the loss (he was young, she was young, they were in love – so goes the narration), would not allow the coincidence – time of death recorded on the certificate and the time the clock stopped – to obstruct his judgment. He went for the cause (later in life, he helped establish the cause of the Challenger space shuttle disaster). That was his story. And in this respect, science is the story into which the narration (of facts, measurements, evaluations, experiments) morphs. The apple falling from the tree, the observations of how this happens (during day or night, sunshine or clouds, noise or quiet, etc.) are the narration. Among the stories, there is one of the ever-hungry traveler (for whom apples fall), another of the reseeding of the tree (can this be the Johnny Appleseed story?), and another for Newton’s theory of gravity.
While narration and story – often considered identical – have attracted the attention of many people, their significance as a substratum of life has escaped the attention of science. There is no class in narration for students of life forms and molecular biology, for future physicians and geneticists. Story was given over to writers and, eventually, filmmakers. To paraphrase none other than Abraham Lincoln: We must like stories; we make so many of them. And we like to hear them. (My wife is still working on a book entitled Stories I Tell My Husband.) The real surprise, though, is that narration and story play a considerable role in the dynamics of the living. Few people are aware that narration, or even stories, are exchanged at all levels of life (among cells, for example, or among neurons). It is from the embodied narration of life that we get to understand life as a narration, and further generalize to our explanations of reality.
Thesis 1: Narration is a record of change.
Change characteristic of the living (from conception to birth, maturity, and death), and change of the physical world (mountains change, stones are “polished” by wind and water, oceans undergo cycles of ebb and flow, etc.) can be recorded. Depending upon the resolution (how fine the grain of our distinctions) of our observations, the various narratives of change constitute a body of knowledge on whose basis science advances and technology is produced. In this sense, narrations are information about change over intervals. Given the complexity of reality, the information is always incomplete (we shall return to this idea). Moreover, the information is not associated with meaning. It only reports on changes, not on the context.
Thesis 2: Narrations are representations of change.
Without entering into details, let us take note of the fact that objects {o1, o2, ?}, natural or man-made, processes {p1, p2 ?}, natural or artificial, attributes {a1, a2, ?}, of objects or processes can be described in many ways. They can be named (labeled, as the terminology of cognitive science suggests), measured, depicted in drawings, photographed, videotaped, filmed, turned into sounds, animations, etc. Words can be used (and made up if necessary) to explain what they are. These are all substitutes for something else, i.e., representations. Even when the real thing (object, process, attribute) is no longer within our reach, no longer actually present, we deal with its representation as it stands for the real thing. Each representation is partial. To capture everything that defines objects, processes, and attributes as they change in time is impossible, if for no other reason than because time is open to infinity. 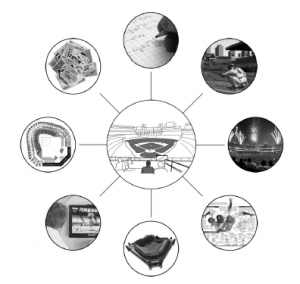 Figure 3: From the scalpel to the bendable laser scalpel 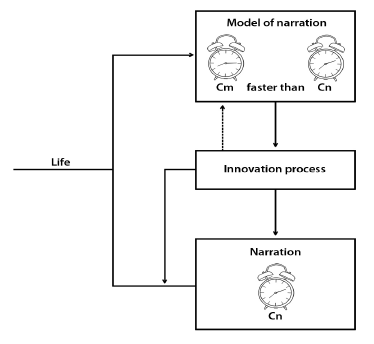 Narration: Pistorius is born with congenital absence of the fibula – real time.
Model: In the absence of the fibula, legs are amputated – real time. Innovation: Given the narration, the model (interpretation, i.e., story), a blade-based replacement of legs and feet is desired (the Ossur product) – faster than the real time of the narration.
To further explain, let’s take a look at the narration we can call the toaster: To keep bread fresh for a longer time, exposing it to fire (heat) proves useful. Over time, many attempts have been made to do exactly that: bread slices are attached to a simple contrivance and brought close to fire. As electricity became available, heated elements proved more appropriate to the goal. The narration changed: to obtain the feeling of fresh bread (warm from the oven), to obtain the taste of crisp crust; to come up with new dishes. All these narrations are associated with innovations. The real-time process is toasting (at various intensities). The fasterthan- real-time is the generation of new expectations.

Figure 5: From the fireplace toaster to the Porsche toaster: changed narration, changed design.