What is learned today will be irrelevant tomorrow.

In 1975, Professor William Kahan, a colleague of mine, a superior intellect and a Turing Prize winner, had this to say: â€˜Fuzzy theory is wrong, wrong and pernicious’. I cannot think of any problem that could not be solved by ordinary logic. What Zadeh is saying is the same sort of things: Technology got us into this mess and now it can’t get us out. What we need is more logical thinking, not less. The danger of fuzzy theory is that it will encourage this sort of imprecise thinking that has brought us so much trouble.

The fuzzy logic tutorial is neither partisan nor missionary. I recommend this tutorial for students and scientists (even those not working in the concept definition area), as I recommend Machery’s tutorial. Believe it or not, fuzzy logic is still not well known among those in academia, or even among those active in research.
The question of relevance with respect to the psychology of concepts (What is it good for?) can be asked also with respect to fuzzy logic. The first answer I would like to suggest has to do with the subject of the book. Recently, Meech (2011, University of British Columbia) submitted to an informal discussion on the significance of fuzzy logic a text entitled â€˜How some simple fuzzy thinking might have prevented the Challenger accident’. His concept is SAFETY. This comes from the knowledge domain of underground mining.
A crisp definition of SAFE/UNSAFE and the assumption that a Factor of Safety of 1.5 would be acceptable are considered in the decision making. By using crisp definitions of SAFE and UNSAFE, these terms are true and false, respectively, when the Factor of Safety lies at 1.5 or higher and are false and true, respectively, when it lies below 1.5 (Figure 1).

Once fuzzy reasoning is applied, it turns out that SAFE and UNSAFE are no longer mutually exclusive, but complementary (Figure 2). 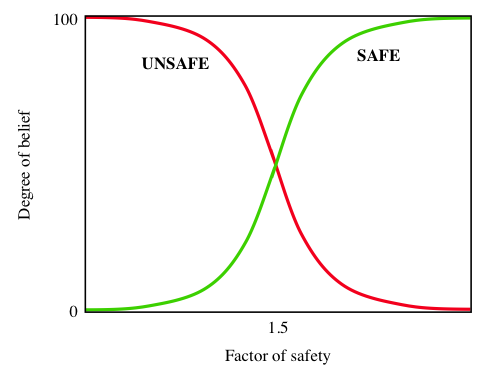 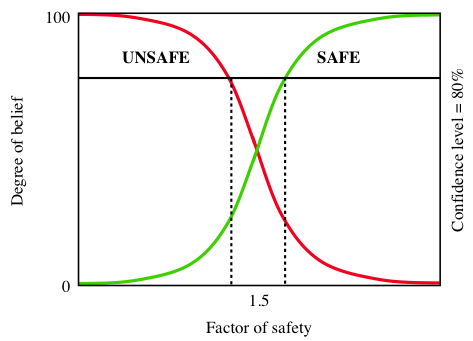 Imagine now that somehow knowledge about concepts and fuzzy logic meets at the conception of a robot that will perform autonomously in real life. Labelling the world, which humans perform as a matter of fact, corresponds to concept building and use. The example from Meech (to whom I am grateful for allowing me to quote from his succinct paper) is indicative of a process of evaluation performed by the autonomous robot as it navigates the world and solves a variety of tasks (e.g. identifies dangerous situations, helps elderly, oversees the functioning of complex devices, etc.). Of course, we can argue whether not a robot will actually work on concepts or only on information. But there is no argument that such a robot will function in a meaning domain. (â€˜Is that printer, packaged for a trans- Atlantic flight, actually what the label states, or is it a bomb?’) The relevance of fuzzy logic with respect to concepts extends further. (I shall return to this at the end of the review.)
In what turns out to be the most enjoyable text in the book, Eleanor H. Rosch (Chapter 4) puts the whole enterprise in its real focus: given a scientific enquiry Si, which are the means of enquiry Mi appropriate to the task? Better yet: does the question define the tools or do the tools shape the question?
Scientific enquiry → Means of enquiry
Means of enquiry → Scientific enquiry 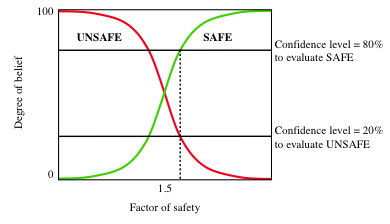 Occam’s lex parsimoniae (i.e. keep it simple, as his law of parsimony is known) aside, there are no efficient means for deciding what is necessary and what is superfluous. (Even so many years after the birth of the fuzzy perspective, it is still considered as unnecessary in some circles.)
Her view is as simple as it is clear: â€˜People have different modes of using their concepts, and they are quite flexible in switching among them’ (p. 108). Dogmatism was never a good guide; ignorance even less. How does the scientist find those representations that promise to help in assigning meaning to the data? Osherson and Smith rejected fuzzy logic because their experimental data triggered questions. It turns out that this happened against the background of the â€˜Ill-Conceived Assumption That Fuzzy Set Theory is a Theory of Concept’. On analysing the text (cf. 5.4.1), BÄ›lohlvÃ¡ek and Klir identify the following fallacies:

The analysis is factual, very precise; the conclusions (well tempered) are quite convincing.
It is worth quoting:

In this chapter, we discuss and correct the many misunderstandings, misconceptions, and oversights regarding the role of fuzzy logic in the psychology of concepts that are repeated again and again in the literature of this field, and are accepted, by and large, uncritically. (cf. 5.5)