The old never gave in to the new. It became superfluous.

Where is the “Human” in Human-Computer Interaction?

Computers are machines. (What’s new?) Humans are not – but they are treated as though they were. Computers react (to our commands, to instructions embedded in software, to data patterns, and to electrical power loss). Human beings 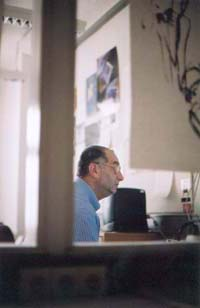 react as well, but in addition, they anticipate. All computers are the same, or at least should be (if you are lucky). No two human individuals are the same. Then why does the HCI community lose sight of the distinction between humans and machines? How come the HCI community treats human beings as though they were all the same? And how come the HCI community, on behalf of the computer industry, takes it upon itself to program the human being to act as a machine, instead of making possible the highest degree of individualization? Machines can process huge amounts of data. No human being will ever attain the same performance. But machines cannot formulate the questions that machines are asked to handle. How come the HCI community reverses this condition by having computers ask (pseudo-questions, of course) and human beings mortified that they might not give the right answer? (Ever forgot your password?) Such questions, and others going a bit deeper, are my subject.
At the end of its infancy, digital technology deserves more than the baby-talk of parents so much infatuated with their offspring that they effectively block development.
www.anticipation.info
Short Bio
Dr. Mihai Nadin is a Professor and Head of the Computational Design Program at the University of Wuppertal, Germany and Visiting Scholar, University of California at Berkeley, Berkeley Initiative in Soft Computing (BISC), Computer Science Department. In his program, computational knowledge of design and design processes are used to prepare professionals for making the world of ubiquitous computing possible.
After having worked in visualization, digital photography, human-computer interaction, and multimedia, Nadin currently carries out research on anticipation and anticipatory computing at Stanford University and the University of California at Berkeley.
Past research advanced ideas that were later taken up by others in industry and education. For example: The “invisible computer” (1994), ubiquitous computing (1990), variable configuration computers (1989), design machine based on neural networking (1986), downloadable software-driven automotive performance (1984), iconic interface (1980) – a previous article on the subject inspired the XEROX group to adopt semiotically based iconic interface. “Anticipation” (1989) is being picked up by various research groups in the USA and Europe.
Consulting for innovative programs in higher education, governments and industry (virtual sets for West German TV; iconic interface, Apple, Inc.; networked medical imaging, NYNEX; MAN and Siemens in Germany). Authored 30 books on various subjects (technology, communications, art and design, technology); ca. 400 articles in books and journals; several digital publications (CD-ROM, software, Websites). His book, The Civilization of Illiteracy, is one of the most important books about the digital age. It was translated into German and will be translated into Spanish (available on the www).