Only dead fish go with the flow.

Information and Semiotic Processes: The Semiotics of Computation 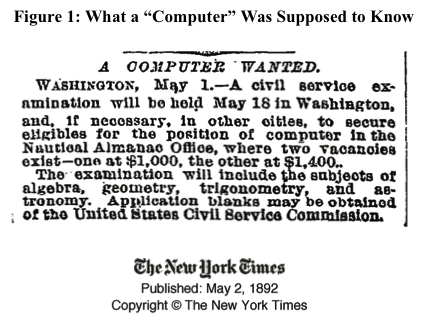 Note: The human being as a computer predates the automation of mathematics.
Leibniz and Peirce were, for their respective times, good mathematicians. Thus they understood what was necessary for being a good computer—human or machine.
Among those prerequisites are:

Peirce contributed a text entitled “Logical Machines” to the first issue of The American Journal of Psychology (November 1887, pp. 165-169). He made reference to “Voyage to Laputa” (from Gulliver’s Travels), in particular to a machine for evolving science automatically. Jonathan Swift’s ironic take on Aristotle and Bacon is contrasted to the logical machines of Jevons and Marquand (who was one of Peirce’s students), and to the mathematical engines (Webb’s adder, Babbage’s analytical engine) of his own time. The subject, however, is “the nature of the reasoning process” (Peirce, p. 165). Those willing to take time will enjoy the detailed presentation of the logic at work in such machines. Readers in a hurry (and this is the rule in our time) will notice some telling observations:

Take note: There is no suggestion that semiotics might be of any relevance to understanding what the machines Peirce described in his article are. We should probably understand that the knowledge domain of semiotics does not include any machine, neither the abacus nor the most recent embodiment of digital or analog computation, rather, what machines might process, compute, if information and meaning together could become the object of their operation. In addition, they would have to reunite deterministic and non-deterministic aspects characteristic of cognitive processes. Reciprocally, the knowledge domain of computation includes semiotics, whether implicitly or explicitly, because regardless of the nature of computation, it requires representations and interpretations, and assumes interactions mediated by representations with living entities. Indeed, machines operate on real entities when they process them (polishing diamonds, making flour out of wheat, making chips, etc.). Computation operates on the re-presentation of the real even when they drive processing machines. Regardless of their degree of sophistication, the output of semiotic processes, known also as semioses, is always subject to a new process of interpretation, to a new semiosis. Please make note of the distinction of the variety of machines.
But Peirce would not be Peirce if he had not revised his ideas from “Logical Machines.” Lauro Frederico Barbosa da Silveira (1993) documents the change of mind and the difficulties researchers have when they refer to C. S. Peirce (which one?). She discusses semiotic machines—a concept based on logical machines—and identifies learning as a defining characteristic of such machines. So much to uncover. So much to understand.
Degree of Necessity
This is a very simple logical procedure: Imagine that semiotics vanished. Given its relative inadequacy of making possible knowledge otherwise not available, it did die many times. I took Liu’s book, ignored the lack of terminological discipline, and rewrote it (the miracles of digital processing!), leaving out the semiotic terminology. It turns out that the book remained basically the same. Liu’s focus is on information. When the author defines organizational semiotics, that is, the study of organizations using the concepts and methods of semiotics (Liu, p. 19), the expectation is that the concepts and methods be clearly defined. But this is not the case with his own writing. Liu writes about divisions of semiotics (confusing levels of semiotic analysis with branches). His work is informed by that of Stamper (1973). This is how other branches are introduced (Stamper’s contributions): physics, (“concerned with the physical aspects of signs at the level of signals and marks” [sic, Liu, 2005, p. 26]); empirics (“to study statistical properties of signs when different physical media and devices are used” Liu, p. 26); and the social world (“where the effects of the use of signs in human affairs are studied,” Liu, p. 27). If only Occam’s razor would be at work as authors (Liu and Stamper are not exceptions) continue to multiply the concepts. They do not realize that a tremendous effort was already made to reduce the variety of semiotic entities to what is needed in order to describe semiotic processes coherently and consistently. Of course, we are all entitled to conceive of our own terminology and to suggest new methods.
There is no expectation of dogmatic alignment that should ever censure a scientist. But researchers are also responsible for their attempts to elucidate simple or complex aspects of reality. Moreover, when a researcher builds upon someone else’s work—terminology, in particular—they owe it to them to maintain integrity. Let me suggest that Kecheng Liu would be better off in his work without any semiotics terminology. He gives “An Example of Semiotic Analysis” (how an organization works as an information system). I shall limit the quotation (no, I did not make it up); but if you want to have a good Erewhon moment, go for the entire so-called “six semiotic aspects”:

At the physical level, the telephone must be connected by the phone line through telephone service providers.
At the empirical level, the voice signals will be converted into electronic (or optical) signals and transmitted between two telephones (Liu, 2005, pp. 35-36).

Note: The notion of automaton is a generalization of machine functioning. The fuzzy description of input and output values corresponds to the intention of capturing not only quantities, but also qualities. The two transfer functions Î´ and Î» could be defined in such a manner that pseudo-non-determinism behaviors can be simulated by the fuzzy automaton.
This inspired the analogy to an engine that embodies semiotic processes. Over time, I lost sight of my initial premise. It took until January 20103 to realize that various authors arguing in favor of the semiotic machine terminology are advancing an understanding of semiotics that is not mine. Indeed, only for those who equate information processes and semiotic processes does this expression appear as justified. Moreover, only for those who see no difference between the living and the physical does the reduction to the machine (going back to Descartes) make sense. This is not my case. The mathematical proof of the equivalence between the dynamic definition of the sign and fuzzy automata was, at best, a starting point for further elaborations that led me to anticipatory systems (anticipation).
The information processing machine embodies our understanding of the world of action-reaction. It does not know what uncertainty is, although it knows a lot about probability. The semiotic machine (more a formal analogy than a physical realization) is the expression of questions concerning anticipation. Such a “machine” is non- deterministic, has at least two clocks, and is highly adaptive and goal driven (teleological). With this in mind, I realize that the varieties of understandings associated with those I mentioned above corresponds to fundamental positions that are not reconcilable. In a remarkable contribution (Hong, 2007), Sungook Hong framed the subject of the relation between “Man and Machine in the 1960s” a very broad perspective. There is no need to quote here, at length, Norbert Wiener, Heinz von Foerster, Mansfield Clynes, Nathan Kline (to whom we owe the term cyborg), Erich Fromm, Jacques Ellul, Lewis Mumford, John Kenneth Galbraith, and others. But there is a definite need to become aware of the distinction that FrancÌ§ois Jacob (1974) made between the physical world and that of the living: one of information processes, the other with the added dimension of semiotic processes—and their inherent uncertainty. Simple machines (Rosen’s terminology, 1985, p. 111) “do not make errors,” complex machines can behave erroneously (disease is such a behavior). In its von Neumann- Turing embodiment, the computer is a deterministic machine. Different modes of computation are extremely seductive, but not yet available. The deterministic machine works below the threshold of complexity associated with the living (and with anticipation as a necessary characteristic of existence. Semiotic activity corresponds to complexity. Below the threshold of the living, we deal with pseudo-signs and not with signs (if you still want to focus on signs and not on representations).
Researchers of molecular computing (Tadashi Nakano of UC-Irving, Miles Pierce of Caltech, John Reif of Duke University, among others) entertain the hope of synthesizing living machines (see Kroeker, 2008). Turing’s autonomous self- structuring seems appropriate to dealing with living computation. Embedded or not in human bodies, it is an expression of connecting metabolism and representation, that is, information and semiotic processes embodied in meaningful information.
Of course, before any other step ahead is made, we need to further define our terminology. In this sense, for me semiotics does not have as its subject the often misused concept (entity) called the sign. Rather, focusing on the sign, defined in a variety of ways (some better justified than others), semiotics ends up as an ill-defined discipline. The characteristic of semiotics, as Hausdorff understood and as Cassirer argued for is re-presentation. The fact that the means of representation can be called signs, or be defined as signs, is less relevant than the essential functions of semiotics. In close relation to representation is the function of interpretation through which meaning is conjured. Moreover, representations are subject to further representation, to operations on representations, to interpretations that in turn become new representations, and so on. Sign is as good a placeholder as numbers are in mathematics. But no more than that. They do not relate to interactions, which are the main characteristic of the living. In particular, mind interactions are defining: We automatically read minds all the time, we probe the future, we are in anticipation (which is different from we anticipate, a verb that actually makes no sense).
One more detail: Semiotic reflexivity translates as semiotic awareness. Without awareness of the role that representations have in our understanding of the world and of ourselves, there is no semiotics. No machine ever came up with, on its own doing, with its own resources, a symbol (as Lewis Mumford pointed out: “No computer can make a new symbol out of its own resources” (1967, p. 29). Even if it could, it would not know what to do with it, how it can be interpreted.
The semiotic system that we associate with Peirce, in particular the interpretant process, comes closest to what I suggest. The Peircean definition of the sign, that is, the unity between the object (immediate and dynamic), the representation, and the interpretant, is actually the description of an infinite process, which is the semiosis. 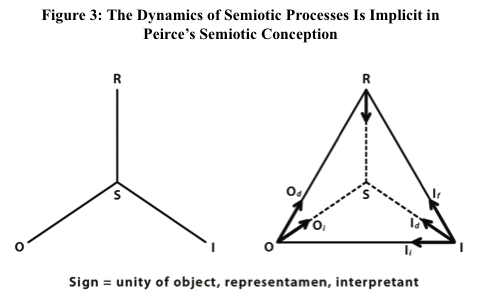 Note: The diagrams correspond to an understanding of representation as the unity between what is represented, the medium (as Peirce called the sign) of representation, and the process of interpretation. The object of representation is further differentiated as immediate and dynamic; the process of interpretation results in immediate, dynamic, and final interpretations (corresponding to theories).
Take note that once we acknowledge the object levels and the interpretant levels, the sign ceases to be a synchronic entity. It gets life, in the sense that the interpretant process injects dynamics into its reality. We never deal with signs; we always deal with representations, sign aggregates whose dynamic meaning is a function of the context, not of the alphabet (i.e., sign repertory). 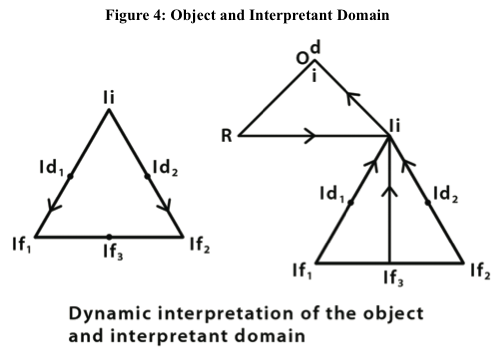