A Science of Change

Concluding chapter in To Live is to Change. Language, History and Anticipation by Frederic ChordaÌ€ Dedicated to the work of Mihai Nadin Barcelona: Anthropos Editorial – NarinÌƒo, August 2010 PDF Introduction “Only dead fish go with the flow.” This is one of the “Nadinisms,” that pop up on quite a number of websites. Readers who […] 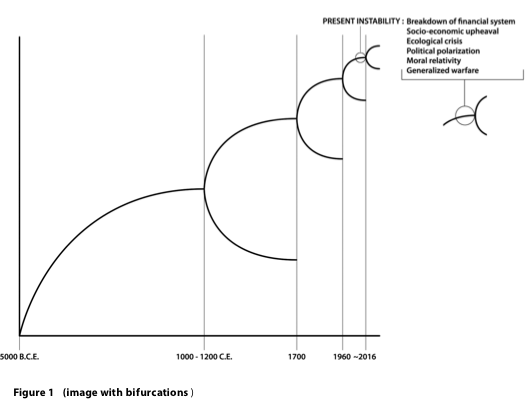 In looking at the dynamics of human history, I realized that each succeeding cycle of change was shorter than the one leading up to it. This thought was inspired by Mitchell Feigenbaum’s research on bifurcations in nature. Picture the branching of a tree. What we also know from the study of dynamic systems is that the time preceding a bifurcation is a time of instability. My prediction of a bifurcation around the year 2016 makes the current instability appear as the preliminary stage. The current instability is defined by breakdown of the financial system; socio-economic upheaval; political polarization; moral relativity; generalized warfare; ecological crisis, (among others). 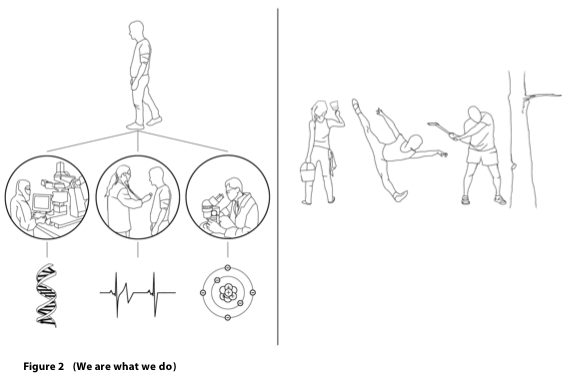 This image illustrates only 3 possible perspectives through which an individual can be described: genetic code/DNA, body temperature, or physical matter. Another description is “We are what we do.” That is, the variety of activities we engage in during our lifetime defines us. When we paint our home, we are house painters; when we exercise, we are runners, walkers, weight-lifters, etc.; when we cut a tree, this practical activity defines our identity during the action.

My answer to the question “What are we?” is: “We are what we do.” And this includes why we do it. The way I arrived at this answer is indicative of the scientific method deployed in my research. To define what makes us what we are, we can refer to experimental evidence accumulated over many centuries. It is this kind of experimental evidence that informs the answer given by physicists, chemists, biologists, physicians, artists, philosophers, etc. They infer from observed, and eventually measured, characteristics to the properties of the entities measured. For the physicist, we human beings, along with stones, trees, stars, water, air, ice, and cosmic gases are nothing but matter—a world made of molecules, atoms, and subatomic particles. Physicists attach to the qualifier “matter” some measurements: weight, density, volume, state (matter is solid, liquid, or gas). All measurements ever performed are a record of how this matter is perceived, moreover, how it changes over time. For the chemist, matter needs to be further defined: Stones are made of matter without life, i.e., inorganic. The identifier “organic matter” corresponds to the subset of the elements making up the living (i.e., a subset of Mendeleev’s table). The notion of the living is itself a construct subject to measurement. For the biologist, the distinctions correspond to other constructs: species, subspecies, etc. For the physician, the definitive characteristics correspond to what a doctor is supposed to do: heal or, better yet, maintain the living in good health. The construct good health becomes a metrics, a “yardstick” against which we measure performance in medical care. Take note of the fact that each definition starts with a construct: something the human being defines. This definition is further applied to the object of our interest. If it fits the definition, it is legitimized as such. If it does not, some other constructs become necessary.
“We are what we do” also means that we are an open-ended process rather than an endpoint. The endpoint, implicit in the process called living turns “We are what we do” into “We are what we have done.” One more thing: “We are what we do” means also that we perceive differences as they affect our own actions. Using a stone to throw at a bird entails the realization of differences in weight, shape, texture, and density, regardless of whether we know what weight, shape, texture, and density mean, that is, whether we learned the labels of these characteristics. Throwing a stone at an enemy entails realizations concerning the body, avoidance, and defense mechanisms, as well as the anticipation that someone might do the same to us.
Experience, learning, constructs
It is very important to understand that in the world we live in, we never meet matter, or organic matter, or molecules, or DNA, or anatomy, or even art (not to be confused with particular human-made artifacts called artworks). Likewise, we never meet numbers, or the famous point (from geometry), the line, the surface, the triangle; we never meet pain, in its generality, or happiness. Pain in its generality means close to nothing. A toothache or lower back pain is concrete. Numbers are constructs; they are identifiers of quantity. The point and the line are geometric abstractions, and so are circles, triangles, and cubes. Pain is something you experience, as is happiness, and as is love. They are impossible to duplicate or produce. We can quantify pain by using other constructs, such as descriptions of faster or slower heartbeat (something hurts so much that the heartbeat changes), of sweat (cold or hot?), or of some actions (if it hurts a little—yet another construct—press softly—another construct; it if hurts a lot, press hard—a lot and hard are also constructs.)
Our actions are what define our own existence in this world, not numbers, circles, concepts, or some of our other constructs. Some actions are natural: breathing, eating, drinking, eliminating waste, reproducing. Others are acquired through interaction with the surrounding environment. A newborn—human or animal—has no experience with any of our constructs. But learning—i.e., acquisition of experience—already starts in the womb, with what is called genetic inheritance. The mother’s body is the first “classroom.” The mother and the future newborn each have a different rhythm, different metabolism, and different interaction with the elements. This “classroom” exposes the fetus to duration, to cycles of light and darkness, to beneficial substances (if the mother eats the right foods) or harmful ones (alcohol, caffeine, drugs). Sooner of later, after birth, the constructs that help us all navigate the universe of our existence are shared. First through actions, later through the labels we use to name them, we learn how to “move” through reality. The fact that Americans keep measuring distances using the more natural foot than the more conventional metric system should simply show that not all constructs are universally shared. If among the constructs that people establish in their activity there are rules of “translation”—like “one foot equals 0.33 meters”—the results of their activity can be shared.
“We are what we do” means no more than that our identity is, at each moment in time, defined through the actions we perform. The label name, or social security number, or whatever we use to refer to ourselves (tall, blond, talkative), or what others call us, does not identify either our sensorial capabilities or our ability to do some things (sing, for instance), or even our inability to do what others do naturally—a blind person is limited in some functions. 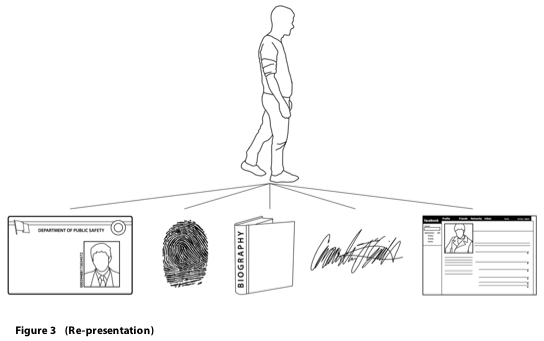 A person can be re-presented on his/her driver’s license, attesting to the fact that the person knows how to operate a car, knows the traffic regulations, and is medically fit to drive. A person can be re-presented by his/her fingerprints, biography, and unique signature. On the new Web 2.0 applications of social networking, we are invited to re-present ourselves in a manner that allows others to find shared characteristics. 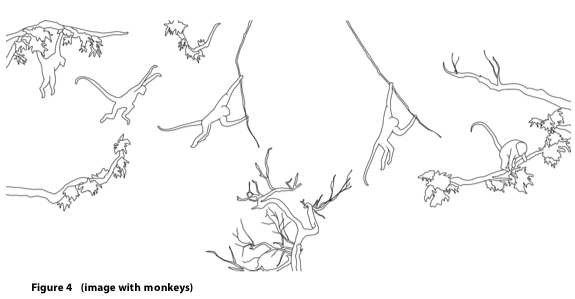 The monkey leaping from one branch to another is an example of anticipation guiding its actions. If the chosen branch is too weak, or if it were to break, the monkey would be hurt or even lose its life. Scientists “married” to determinism would say that the monkey “calculated” its choices. It turns out that if such a calculus were possible, it would require computational performance far exceeding all the computational capabilities available today. The choices made by monkeys are based on accumulated experience, some of which is transmitted genetically and some of which is acquired through learning. 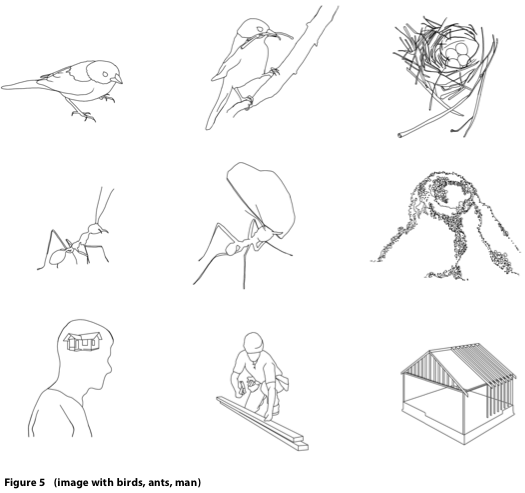 The living is characterized by purposiveness. Birds collecting twigs and grass for a nest, ants storing food for winter, and the human being conceiving a house have in common anticipation expressed as purpose. 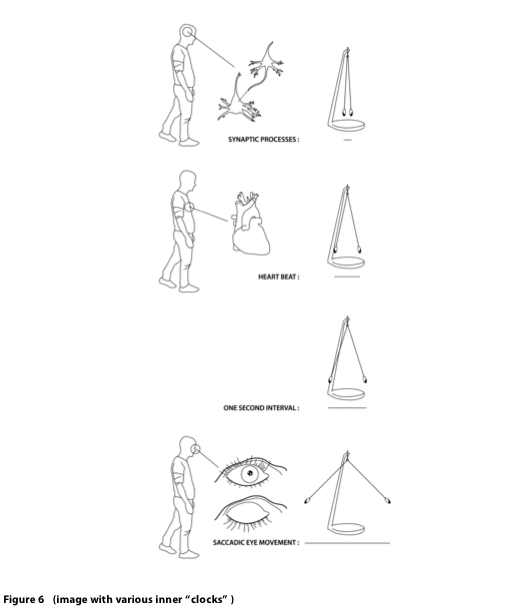 This image illustrates some of the various “clocks” functioning in the human body. Anticipation is possible only because some processes are faster than others. Synaptic connections are at the foundation of mind processes (imagining something before we try to accomplish it). The heartbeat can accelerate before we are even aware of danger. Saccadic eye movement is well ahead of our perception of a change within the field of vision.