Education in reaction to reality is a losing catch-up game where nobody wins. 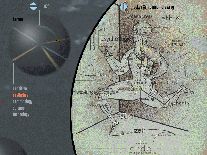 Until now, problems of navigation have been reduced to interface aspects or metaphor constitution. The role of visual language, as well as the understanding of feedback mechanisms were also marginally approached. The role of back channels, however, remains practically a subject for popular articles. And so does the important problem of information overload, especially as it applies to learning and cooperative exploration of knowledge represented in multimedia formats. Moreover, questions pertinent to knowledge acquisition, expression, understanding, and application are marginally approached, if at all.
Navigation tools are foremost provided for the exploration of homogenous sets of data, such as numerical representation, through images, and through texts. Although practitioners of new media know that the real potential of the digital dissemination of knowledge lies in media integration, very little has been done to specifically deal with the integration of image (produced as computer graphics, photo, film, animation, video), text, audio, and other media.
Until now, navigation has been predominantly considered independent of forms and means of representation. Representation, however, is a constitutive dimension, not just a theme of formal description and focus. Accordingly, it is essential to optimize navigation tools in respect to the representation modi. Various possibilities and restrictions are intrinsic to a chosen representational mode. It is not the same thing when navigation takes place in a 3-dimensional space as when it takes place in 2-dimensional text display. In recent time, with the emergence of channels and desktops, the dynamic characteristics of navigation tools have again changed.
The research we carry out is focused on the concept of mind ergonomics (cf. Mihai Nadin). The three aspects that make up the object of this research are:
1. the expression of knowledge through interactive multimedia;
2. navigation tools corresponding to the expression of knowledge through interactive multimedia;
3. mechanisms for updating both the body of knowledge represented through interactive multimedia methods and the appropriate navigation tools.
A multimedia system for digital dissemination of knowledge usually consists of editors, search tools, and browser. Within this model, the user still faces shortcomings such as those described through the expressions “getting lost in hyperspace,” “spaghetti appearance” (interference of data streams), and desynchronization (between navigation methods and new knowledge, between the representation and interior connection of this new knowledge).
The mind ergonomic approach addresses the following aspects:
1. management of vast knowledge spaces, the best example being the Web;
2. communication models (one-to-one, one-to-many, many-to-many);
3. variety of forms of access, from the traditional question-answer model to hyperlinks and timescaling.
The approach followed within our research suggests the following data-mining procedure: the constitution of associative links and the automatic generation of associative maps corresponding to different types of learning and investigation.
In order to accomplish this goal, we suggest a multimedia database with powerful indexing and classification functions. This database is complemented by an intelligent search procedure able to handle multimedia representations of knowledge. The underlying information is provided with a gnoseological map of known interpretations, as well as with an indexing utility in which the learner or researcher advances new hypotheses or new interpretations as these arise through the continuous progress of science, knowledge acquisition, discovery.
In developing the navigational tools, we address the constitutive elements of the mind-ergonomic structure. In detail, this refers to question formulation through text queries or through visual or aural interrogation. Answers are collected and submitted to further evaluation through the program and through the user.
The major cognitive process on which the project focuses is associations. The difficulty in dealing with these is that they constitute an open system. Once constituted, associations can be documented, refined, discarded if they are irrelevant, or submitted for future evaluation by the learner and/or researcher. In terms of programming, associations require the involvement of fuzzy models and a fully supported interactive multimedia environment. (A text can be associated to sound, image, motion, etc. and combinations thereof.)
In the knowledge space that we define, the learner can pursue a one-dimensional inquiry, the classic example being historical analysis, i.e., the gnoseological sequence. Or he/she can pursue a multi-dimensional inquiry, for instance, the relations between a theory in physics and the broader context of knowledge and action, including identifiers such as aesthetic value, dominant cognitive characteristics, the state of technology, etc. We are motivated in this approach by the notion that knowledge dissemination cannot and should not be reduced to retrieval mechanisms.
Learning minds, i.e., people interacting in the process of learning in a digitally supported environment, are actually defined in a process of discovery. The active component of the act of learning is what we are in fact pursuing. Accordingly, the navigation tools developed are tools for making such interaction possible. Especially in a context of information overload, the learner has to be able to prune the seemingly endless knowledge trees provided by digital systems. The result of learning is expressed through the associative map generated by the system as the learner gets closer to understanding the subject researched. After several inquiries, the learner will “own” several such associative maps and will be able to continue the learning process at the level of generality or abstraction at which new knowledge can be generated. Obviously, we no longer support learning as a form of information consumption, but rather as a form of knowledge generation.